A violent and worrying event took place this Wednesday afternoon in the framework of the intervention dictated for the headquarters of the Union Employees of Justice of the Nation (UEJN) Sectional I Tierra del Fuego, where serious incidents occurred between members of the Commission National Board and local representation. As a result of what happened, at least one man and one woman were seriously injured, The first of them must receive four stitches on the forehead.

After the commotion and the police operation deployed in the place last night, in an exclusive dialogue with Infofueguina, the deputy general secretary of the UEJN, Maia Volcovinsky, narrated in detail how the events took place in the building, after a delegation made up of five people will arrive from Buenos Aires to carry out the intervention in the province, due to “complaints and irregularities” detected in the management of local leadership. 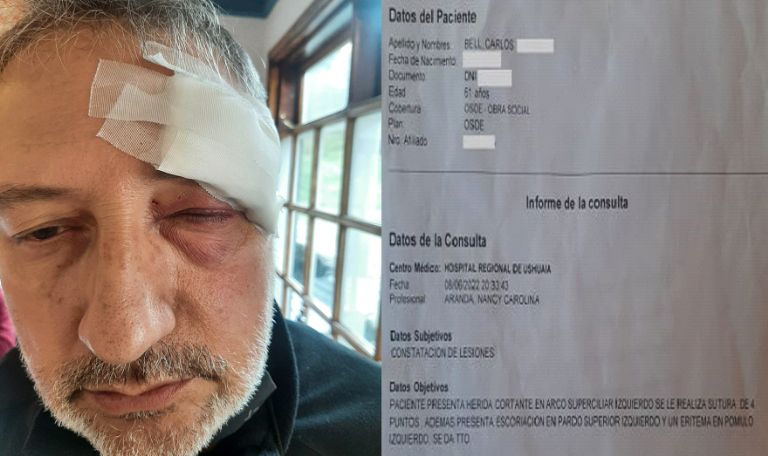 “We came across issues through complaints from affiliates linked to economic management in that branch, specifically how they managed with absolute discretion of the assets of the entire guild, not only the monetary resources, but the departments and so on. When, as national authorities, we find out everything, we travel to look for the supporting documentation,” the secretary explained.

“They threw me on the floor and hit me with a cell phone,” denounced Maia Volcovinsky, deputy general secretary of UEJN

In this sense, he expanded that they first appeared at the police to give notice of said measure “because the premises could be closed, it is a usual procedure”, and to put the intervention into operation for 30 days. And that once they entered the headquarters together with the controller, external auditor accountant and the internal accounting auditor, they found that there was only one laptop (laptop) and a CPU without a monitor.

“It was used by an employee, we asked her for access to the information, meanwhile a part of the Entourage was waiting for members of the Superior Court to respond to notify them of this intervention. We were quietly gathering information, when they kicked in: They threw me on the floor, they hit me on the head with a cell phone,” Volkovinsky stated.

“We went to the STJ, a few minutes later the authorities arrived, punched us, kicked us, pushed us against the walls, going directly to look for the computer. We told him to let go, he didn’t want to let go, he began to wet the computer under the faucet,” he added.

POLICE ACTION, CLOSURE OF THE PREMISES AND COMPLAINT

As a result of the above, Volcovinsky indicated that they called the police, whose cell phones arrived immediately, but he questioned whether the local leader who intended to keep the laptop was allowed to leave the place in his vehicle. “They escorted him with the PC and let him take it away, they made a police cordon and he left calmly in his own car“.

“The police ordered the place to be closed until the prosecution intervenes. I have a bruise on my face, a lot all over my body, I was in the hospital until 1 in the morning. We went to report last night, the accountant Carlos Bell had to sew his head and they gave him four stitchesthe boy who was filming at one point throws me to the floor and hits me on the head with that same cell phone,” he said.

Finally, the secretary of the UEJN emphasized that, depending on the measure adopted by the national leadership, both Bechis, Vidal and Méndez “cannot exercise their functions anymore”, until the Ministry issues a decision on the complaints and the intervention lasts. .

“The inspector remains on the island for 30 days. Yesterday’s skirmish, despite the blows and the scandal, will be an anecdote for what will be discovered. All the darkness of the handling that exists in this section will be able to unveil, for the good of the affiliates”, sentenced.

Nexxt Solutions' proposal for Father's Day: an intelligent and hyperconnected home to enjoy with the family

Discounts on computers with Intel at Fnac, find yours now!