Kashmiri Pandit families who fled a Shopian village days after the targeted killing of a Hindu apple farmer have formally applied as migrants, clearly signalling their homecoming may not happen soon.

In a communication to the commissioner (relief and rehabilitation), thirteen Pandit families from the Chowdari Gund village have asked to be registered as migrants since they have shifted to Jammu and are not “prepared to live in danger”.

“The brutal killing (of Puran Krishan Bhat) has compelled us to leave the village and save our lives. Our parents, wives and young kids are in trauma after the horrible killing. We made a lot of sacrifices while holding the tricolour,” the letter says, and at the end mentions the names of the 13 family heads to be registered. 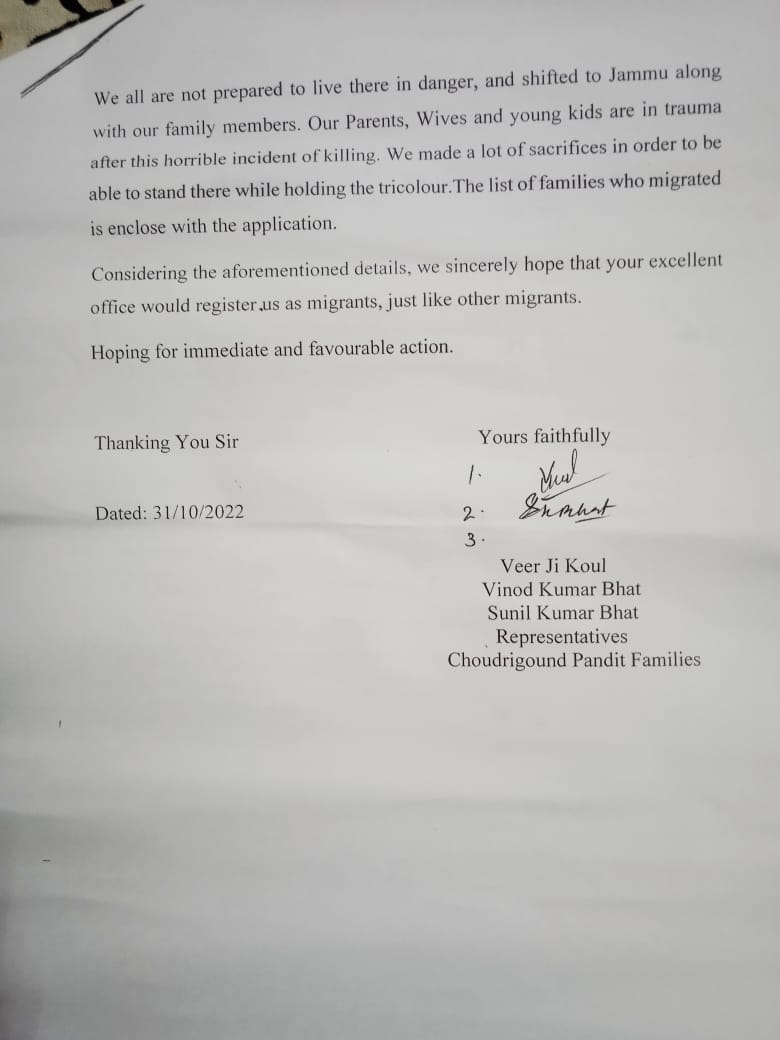 The family of Bhat who was killed by suspected militants in Chowdari Gund village on October 15 too have applied. Bhat is survived by his wife and two minor kids.

Three days after he was shot, two non-local labourers were killed in a neighbouring Harmain village. Earlier two attacks were specifically carried out on Pandit families in Chottigam village in which one person was killed and another injured.

Under the migrant ‘status’, each Pandit family that moved out of the Valley is given a monthly sustenance allowance of Rs 13,000 and other basic facilities like free electricity, drinking water, and a special quota in education and jobs.

The letter that is in possession of News18 mentions that apart from the killing of Bhat, a few incidents had scared the community.

For instance, the letter points out that three teachers from the minorities had a providential escape when assailants had planned to target them in a village primary school and a post on social media platforms had warned the minorities to leave Kashmir or face consequences.

“We will come only when we are assured of safety. Till then we don’t have any hope of returning,” Dolly Kumari, a Pandit woman, had told News18 last week while shifting quietly from the village to Jammu. Like Dolly, the families are now staying with friends and relatives.

The affected families applying for registration as migrants and openly saying they won’t return home have belied the administration’s claim that this is the annual post-harvest shifting to Jammu.

News 18 had earlier carried a series of spot reports from the village showing how the Pandits had left in fear and sans any plan by abandoning everything they called home a few weeks back before the killings. Apple boxes— central to the farmers’ livelihood— cattle, vegetables, fodder, and importantly their homes and hearths are left deserted, presenting a sordid story of a village that prided itself on Kashmiryat even when militancy had torn asunder the centuries-old communal bonds between the Muslims and local Hindus.

Although lieutenant governor Manoj Sinha’s administration has tried to reason that militants responsible for terror acts are being killed, the continued assassinations have shaken the trust of the minorities. Additionally, the administration has been trying hard to convince the Prime Minister’s package employees and scheduled caste employees from Jammu to stay put in the Valley after they developed cold feet to serve in Kashmir, citing a threat to their security. Even though the employees were shifted near district and tehsil headquarters and the security footprint increased near their workplaces, it has done little to improve their confidence.

The Shopian district administration too had put out a statement saying robust security arrangements have been arranged in Chowdari Gund village and other pockets of Kashmiri non-migrant Hindu habitations and villages, but the Chowdari Gund Hindus did not seem to be convinced. “We are in shock. I haven’t stopped crying,” Kumari had said.