The pollution level in Delhi this Diwali is likely to hit ‘severe’ category with PM 2.5 levels estimated to shoot up to nearly five times the safe standard if firecrackers are burst the same way as last year, System for Air Quality and Weather Forecasting and Research (Safar) predicted in its forecast for Diwali week released on Saturday.

Scientists at Safar, under the Union Minister of Earth Sciences (MoES), said that if the additional pollution load from firecracker bursting is same as the previous year (25% of long-term average) coinciding with farm fire emissions, which also likely to pick up from Monday, Delhi’s air quality is likely to touch ‘severe’ while the air quality index (AQI) is expected to cross 400-mark. The air is then considered unsafe to breathe even for healthy people. 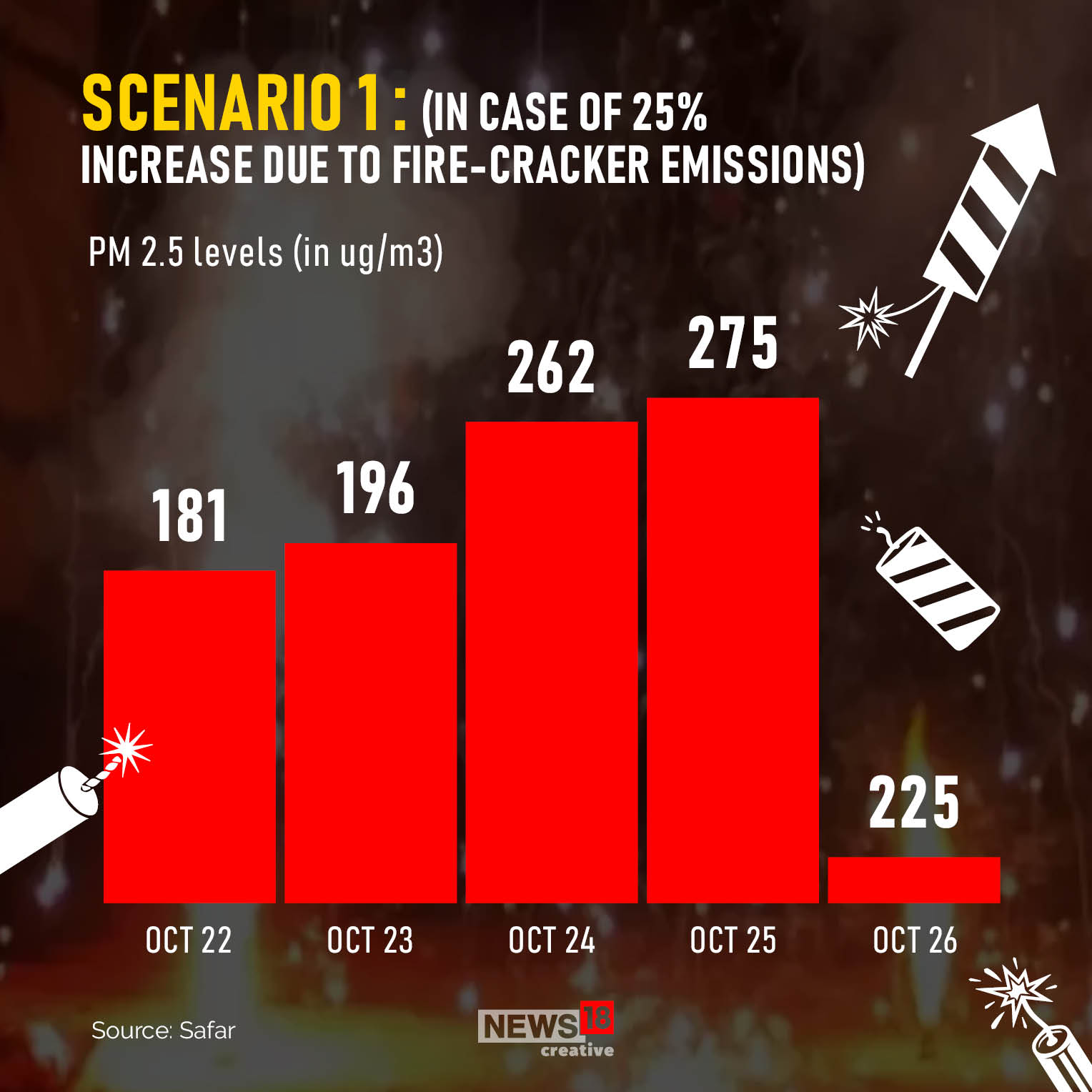 Every year post-Diwali, Delhi sees an annual air pollution crisis with major fire-cracker bursting across NCR, despite a blanket ban in place, acting as a trigger to already ripe conditions due to farm fires and adverse meteorology.

The forecasting model has also warned that the levels of PM10 and PM2.5 – most prominent pollutants in Delhi’s air – are expected between 1 am and 6 am on the midnight of Diwali Day till morning hours on October 25.

PM 10 are coarse material, largely generated from road dust and are likely to shoot up to more than double the safe limit of 100 ug/m3. 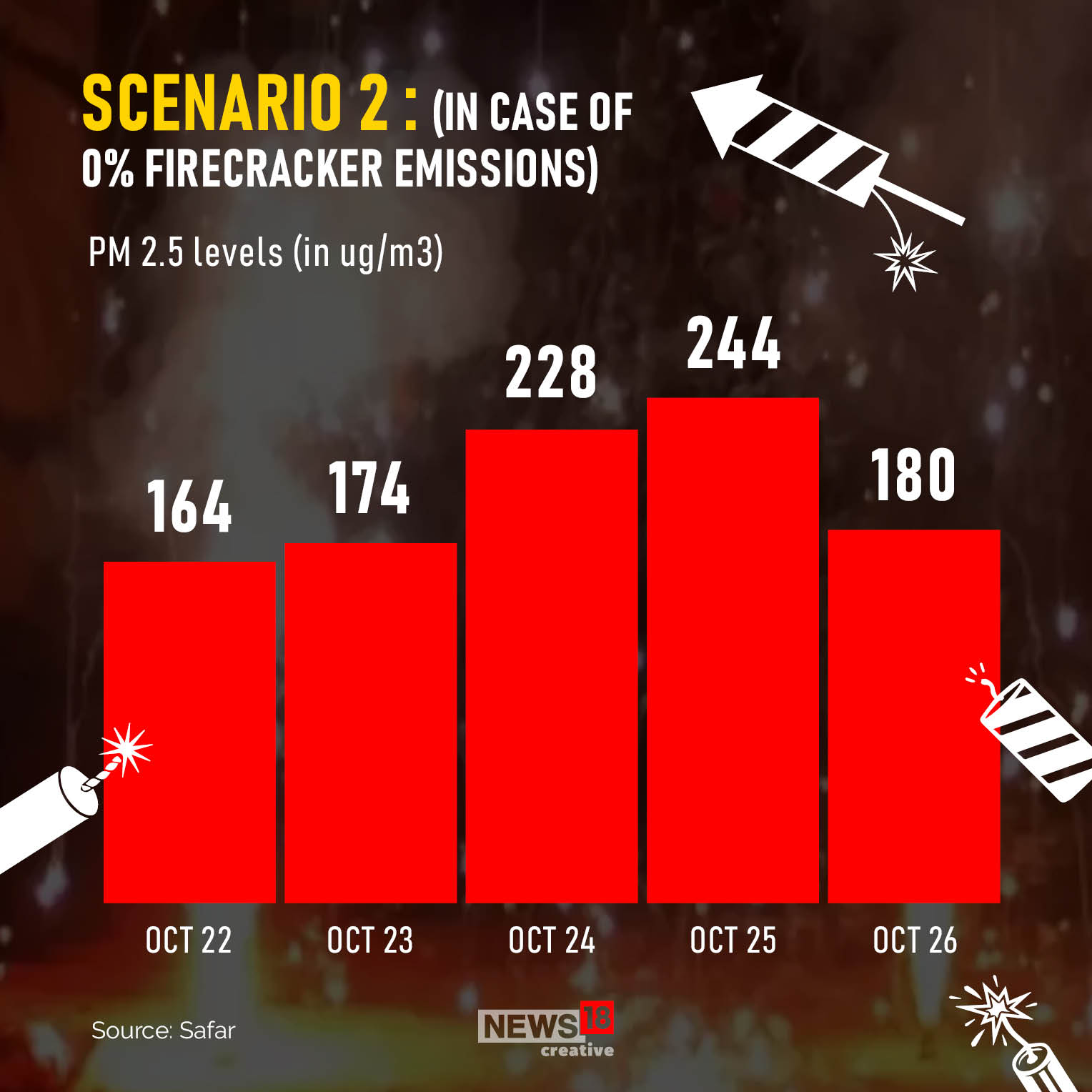 Air quality experts said that even a smaller increase in the additional local emissions due to firecrackers is likely to have a significant deterioration impact during October 24-25 and may put AQI in the severe category.

At present, Delhi ‘s overall air quality is in the ‘poor’ category and is predicted to remain in poor or lower end of ‘very poor’ zone until the morning of October 24. Since crop stubble fire emissions over the northwest region (paddy-growing states of Punjab and Haryana) have so far been low while transport-level winds are slow and hence incapable of bringing the farm fire emissions to Delhi -NCR, it’s share in city’s overall pollution levels has been low — less than 5%, Safar scientists said.

However, the scientists warned that in terms of farm fire emissions, the transport-level winds blowing from —- Punjab -Haryana- Western Uttar Pradesh —- towards Delhi is predicted to pick up from Monday (Diwali Day) and will bring “significant” stubble fire smoke to the capital.

“If stubble burning increases gradually, which is likely, its share in Delhi’s PM2.5 (based on the average temporal variability of fire counts in the previous years) is likely to be 5% on Sunday, 8% on Monday and 16%-18% on Tuesday,” said Gufran Beig, founder-director at Safar.

Explaining the scenario that is likely to be given the conditions, Beig said that on the one hand northwesterly winds blowing over Delhi are bringing heavy emissions, in addition to which, calm and local Delhi wind condition with little ventilation is expected over the next three days.

Under a zero firecracker emission scenario, the level of PM2.5 is predicted to be in the ‘very poor’ category on October 24 (Diwali day).

However, Beig added, with adverse weather conditions leading to bring firecracker related pollution from surrounding regions of Delhi (NCR districts), 15%-18% stubble contribution, provided, without any load of Delhi firecracker emissions, air quality is predicted to touch the upper end of ‘very poor’ to lower end of ‘severe’ on October 25.

“And, if an additional fire cracker load of 25% of long-term cracker load (as last year) is added along with background emissions, then air quality is predicted to worsen to severe zone on Diwali and a day after Diwali Day (October 24-25). This is mainly due to stable/inversion conditions during early morning hours that trap pollutants near to surface,” he said.

It is likely to improve slightly on October 26 onwards, as surface winds will pick up and stubble transport winds may remain slow.

Anumita Roychowdhury, executive director, the Centre for Science and Environment (CSE) said that given the conditions, it is only effective enforcement of the ban and implementation of policy measures on ground that can prevent Delhi from seeing a ‘severe’ smog episode (when PM 2.5 levels is in severe category for more than 48 hours) yet again this year.