India’s Milk And Egg Production Nearly Doubled since 2010, according to Govt

India’s milk and egg production have nearly doubled between 2010-11 and 2020-21, government data analysed by CNN-News18 shows. The production of eggs, according to information from the department of animal husbandry and dairying and the department of fisheries, has increased by 1.9 times and that of milk by 1.7 times during the said period. “Poultry production in India has taken a quantum leap in the last four decades, emerging from conventional farming practices to commercial production systems with state-of-the-art technological interventions. Currently, the total poultry population in our country is 851.81 million (as per 20th Livestock Census) and egg production is around 122.05 billion numbers during 2020-21 (Provisional),” the department said in its annual report. 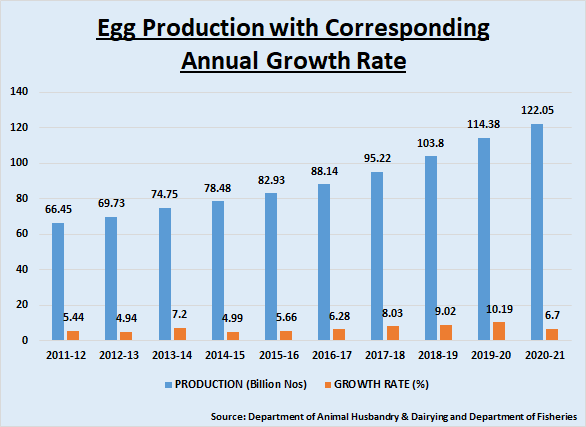 According to the department, the dairy sector assumes a great deal of significance for India on various accounts. It has been a major contributor to the growth of the rural economy in India.

As an industry, it employs more than 80 million rural households with the majority being small and marginal farmers as well as the landless.

The cooperative societies have not only made the farmers self-sufficient but have also broken the shackles of gender, caste, religion, and community. Women producers form the major workforce of the dairy sector in the country. The sector is an important job provider, especially for women, and plays a leading role in women’s empowerment.