As per the Accidental Deaths & Suicides in India 2021 report, the country registered 4.03 lakh accidents that resulted in over 1.55 lakh deaths. The road accident deaths registered during 2021 were about 17% more when compared to 2020 – the year when India saw the Covid-induced nationwide lockdown. A cause-wise analysis of road accidents revealed that most of the road accidents – about 60% – were due to overspeeding. Around 2.41 lakh out of 4.03 lakh cases were because of overspeeding that killed 87,050 people and injured 2.28 lakh. 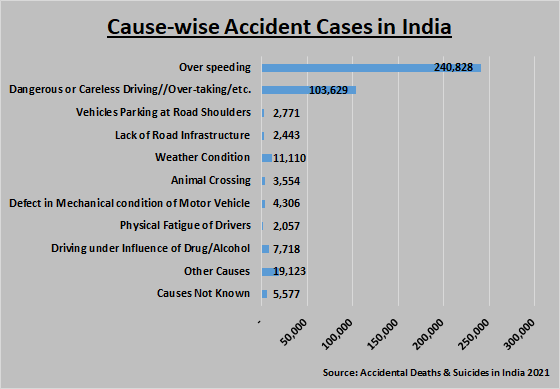 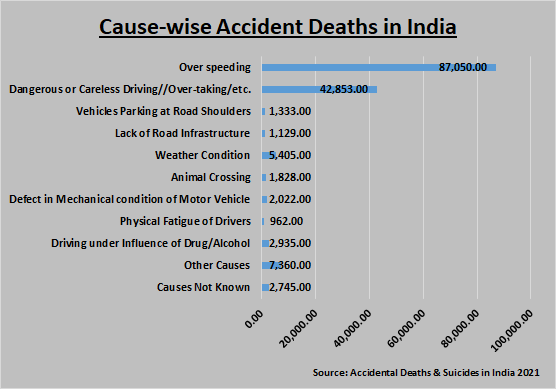 The report shows that during the last year, two-wheelers have accounted for maximum fatal road accidents, at 44.5%, followed by cars (15.1%), and trucks/lorries (9.4%). 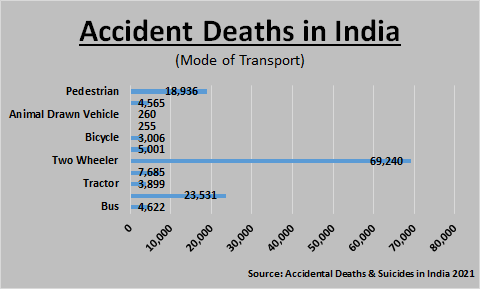 For every 100 kilometre of road in India, there are six accidents and two deaths, as per the report.

It also shows that both in rural as well as urban areas, most of the accidents – about 30% – were reported near residential areas.

Around 8% of road accidents in the urban areas took place at pedestrian crossings – 12,528 cases.

According to the Ministry of Road Transport and Highways, it has formulated a multi-pronged strategy to address the issue of road safety based on education and engineering – both of roads and vehicles, enforcement and emergency care.

Also, the union government has announced that it is committed, as per the Stockholm Declaration, to reduce the number of road traffic deaths and injuries to 50% by 2030.

Last month, Union Minister for Road Transport and Highways Nitin Gadkari called upon all the state transport ministers and officials to work together to halve road accidents and deaths by 2024.

In the past few weeks, some deadly road accidents have been recorded from across the country.

On October 6, at least nine people, including five students, were killed when a tourist bus carrying schoolchildren rammed into a KSRTC bus at Kerala’s Palakkad. Over 50 others were also injured and more than a dozen are in a critical condition.

The previous day, five people died in a deadly car crash on the Bandra-Worli Sea Link in Mumbai. Eight others were injured.

On October 4, 10 people were killed and seven others were injured when the three-wheeler they were travelling in was hit by a truck on a national highway in Gujarat’s Vadodara. The same day, another accident took place in Pauri Garhwal district of Uttarakhand. At least 30 people were killed and 20 others were injured when a bus, carrying a wedding party, fell into a gorge.

In Jharkhand, four people were killed and 25 others were injured when the bus they were travelling in overturned in Hazaribagh district on October 1.

On September 28, 10 people died and 39 others were injured after a private bus collided with a truck head-on in Uttar Pradesh’s Lakhimpur Kheri. Six passengers of the bus died on the spot, two died on the way to hospital, and two others succumbed to their injuries in hospital.

On September 14, 11 people died and 27 more sustained injuries when a mini-bus plunged into a deep gorge in Jammu and Kashmir’s Poonch district. Days later, on September 17, at least seven people were killed and a dozen were injured after a bus carrying around 50 passengers fell off a bridge in Jharkhand’s Hazaribagh district.

On September 16, a speeding coal-laden truck hit a bus on Odisha’s Jharsuguda-Sambalpur Biju Expressway that killed seven people. There were 60 workers on the bus.

Last month, industrialist Cyrus Mistry died in a car accident on the Mumbai-Ahmedabad national highway. Prima facie investigations suggested that overspeeding and “error of judgement” by the driver led to the crash.